How to set up cellranger to make your hpc admin happy

I found myself to force to use cellranger. Meanwhile it helps a lot to run from bcl files to single cell counts matrixes, I discovered that is quite difficult to control many options related to optimization.

I have to run more than 200 samples in a short time of period. In my current position at MIT, I joined the OpenMind cluster in the McGovern institute. I was pleased to find a very flexible cluster, but as any other cluster you need to respect other users.

My samples are human samples, so I need a lot of memory so STAR can run. The command line is easy to set up:

Of course, that is in local mode. If you want to set up a job to a cluster, it would look like this:

The main problem with that is you are using 120G during all the process that could go to 1-2 days.

I discovered that you can setup the cluster mode to make cellranger to send jobs to the cluster. However, slurm is not a option to the documentation, BUT you can specify a template file:

note: this is set up during genome generation with the parameters:

note: default is 16G but if I use that then my jobs are cancelled because using more memory than requested, as I expected considering STAR needs more than that for human genome.

I guess I didn’t look at the first place I should have looked, but it took me some time to discovered that the memory is coming from a file in the reference genome folder:

I realized that when I found, after 100 ls/cat/less/grep, this file with these lines of code:

So, easy peasy, I changed that to 110. I relaunched the job I was using to test, and found that it was still setting up 220G…WHY!?!!? well, it seems if you relaunch in a step where the alignment has already begun, there is a cache for the resources. So after more time trying to figure out this and asking myself, why I decided my career path to be bioinformatics, I tried a fresh start and…IT WORKED.

How happy one can be to see a job requesting the expected resources.

I went a step further, and looked how much memory actually it was using during the alignment step, and I saw that actually only needs 64G, so I updated to 72G, to gain more karma from the HPC world.

There is one more thing, that will set jobs of 72G and 4 cores, if you want to increase the number of cores, then use this option --mempercore 6 or whatever number that you want: mempercore = 72G/final_cores.

Finally, I felt that I was doing my best to behave and avoid making angry other people using the hpc. The final setup looks like this:

I used mxjobs=3 to avoid a lot of jobs. I am testing how things go, this could be spanned to bigger numbers.

I used jobinterval=1000 to avoid sending jobs at the same time, just in case, but I don’t have any proof to support this. 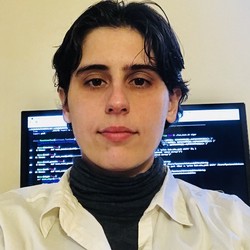